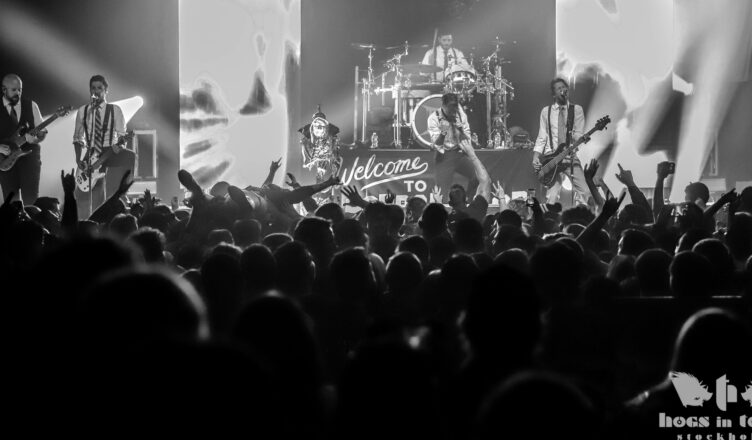 Masses of fans flooded into Baltimore, MD on Friday, Nov 26th on a pilgrimage to the world of Horrorwood, created by the band of psychopaths known as Ice Nine Kills. Who would survive to tell their tales from the night and who would leave as corpses in the coroner’s van?

Ice Nine Kills kills it on stage with their slashcore music and a theatrical performance. The show opened with the playing of “Opening Night” with the words to the song scrolling on twin video panels on each side of the stage. Paying homage to the horror scene, the band takes the stage wearing masks, dressed in suits and ties with murder props. Charnas began singing the melodic intro to “Welcome to Horrorwood”, reminding me of Michael Crawford in the Phantom of the Opera with a half mask covering his face.

“Savages” was the next up with Charnas brandishing a chain saw in the air paying homage to The Texas Chain Saw Massacre. Other weapons on display throughout the night included a machete, hook, and blade glove reminiscent of the Friday the 13th, Candyman, and Nightmare on Elm Street movies.

Loud music, melodic and viscous vocals, plenty of blood spilling, and satisfied raucous fans embodied what i witnessed at this show. Spencer Charnas and the rest of the band put on an epic, menacing performance, slashing and hacking their way through a 16-song set. What a performance!!