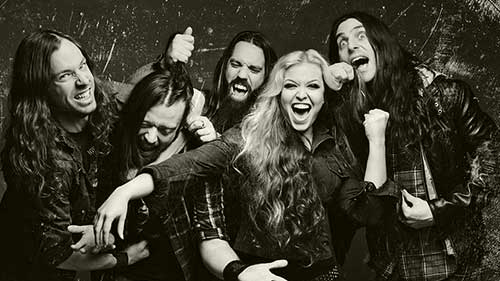 THE AGONIST will release their new album and Napalm Records debut Five on September 30th. Today the band has dropped the first official video from Five, for the song “The Moment”. Watch it HERE:

Frontwoman Vicky Psarakis spoke about the making of the video:
“The Moment’ was probably the most exciting and demanding video I’ve had to shoot so far. Chris (bassist / FTB Visuals director) came up to me with the idea to create a “storyline” with a close up of just my face singing the lyrics underwater. And we achieved it by building a box with a plexiglas panel that fit my head, while the rest of my body was standing and perfectly dry. I guess you could say it was scary and awkward to have just your head submerged underwater and a bit dangerous to have to perform the entire song in that position, but honestly, I wouldn’t mind doing the whole thing all over again!”

Maor Appelbaum handled the mastering at Maor Appelbaum Mastering studios. Maor has had the pleasure of mastering recordings for major international acts such as: Faith No More, Yes, Starset, Ill Nino, Dokken, Fates Warning, Sepultura, Yngwie Malmsteen, Armored Saint, Lita Ford, Butcher Babies, and more.
Five Track Listing:
1. The Moment
2. The Chain
3. The Anchor And The Sail
4. The Game
5. The Ocean
6. The Hunt
7. The Raven Eyes
8. The Wake
9. The Resurrection
10. The Villain
11. The Pursuit Of Emptiness
12. The Man Who Fell To Earth
13. The Trial
14. Take Me To Church (Hozier cover) (Bonus Edition Only)

More on THE AGONIST
THE AGONIST is a Canadian extreme metal band from Montreal, Quebec, formed in 2004. The current line up consists of guitarists Danny Marino and Pascal (Paco) Jobin, bassist Chris Kells, drummer Simon Mckay, and vocalist Vicky Psarakis, who joined in March 2014 following the departure of vocalist and founding member Alissa White-Gluz. Both Psarakis and White-Gluz use growled and clean vocals. To date, THE AGONIST has released four studio albums; the latest, “Eye of Providence”, was released in February 2015. Touring extensively since their first album, they have shared the stage with bands such as Arsonists Get All the Girls, Epica, the Faceless, Chelsea Grin, Kamelot and Visions of Atlantis.